A Brief History of Garlands

In 1985 the Small Garden was started in a grassland field which was part of Garlands Farm owned by the Raymont Family Trust. It occupied one and a half acres of land adjacent to the village green of Upper Basildon on the edge of the Berkshire Downs above the River Thames.

It became a well established garden supplying the local community with freshly picked organically grown fruit and vegetables through Garlands Organic Farm Shop which was on site. 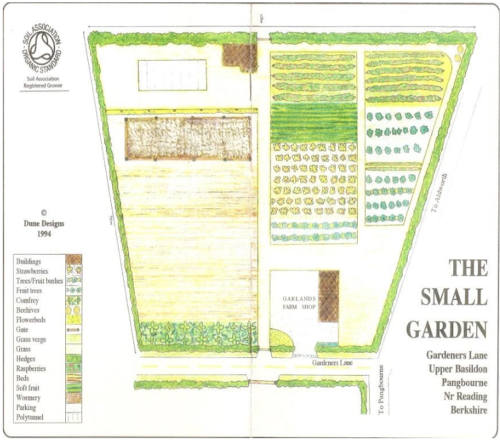 The August 2000 edition of Pangbourne Magazine announced that “Garlands Organic officially opened its doors in July at new premises in the heart of Pangbourne. After more than 10 years in Upper Basildon selling home grown organic fruit and vegetables and pure nutritious groceries, Garlands has moved to Pangbourne….”

A lot has changed since then. The owners at that time were Gabriel and Denise Hutchings, and understandably their prime focus was on fruit and veg, so they had installed in one quarter of the shop, with obviously great effort, an air-conditioned cold store (removed from Upper Basildon). The first Garlands branding was a blue cherub and the slogan  “Organic Shopping Made Easy”, and some jute bags showing this still exist.

In 2005 the store was taken over by Hannah and Innes Ballantyne who were immediately successful, particularly in winning “Best Small Shop 2007” at the prestigious Natural & Organic Awards. They started many new ranges including health supplements and introduced the branding with the flower and fruit.

Hannah and Innes launched the online business – first by selling items available in store through garlandsorganic.co.uk and then in 2010 starting a new business buyBigorganic which offers a discount for buying in bulk. They also took the risk of introducing Cook ready meals which are not an obvious fit for an organic shop, but which have proved to be hugely popular. Hannah and Innes obviously put an enormous amount into the shop and laid firm foundations for where Garlands is today. 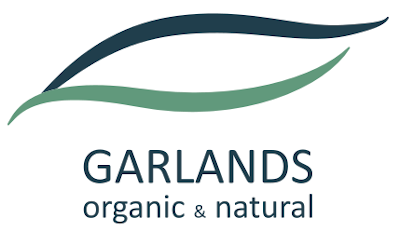 When Abi and her family took over in 2012, they opened up the shop by removing the cold store and replaced the now aging fridges and freezers. This provided the space to extend the range of products available so that there are now six ranges of health supplements, and there is also a wide selection of natural cosmetics and skincare products. More recently came the Boody range of bamboo clothing. With the current emphasis on healthy eating and lifestyle Garlands is now very much a health store, and in 2014 played a key role in organising Pangbourne’s Health and Well-being Event. It was also represented at the Soil Association’s Independent Retailers forum and was accredited as a member of the Living Wage Foundation. More recently it has joined the National Association of Health Stores.

There is still the same commitment to the organic ethos. As Gabriel Hutchings wrote in his 2000 article:  “There are many reasons for going organic. For some people it is the knowledge that this type of farming provides the environmental benefits of maintaining a natural ecosystem. For others it is simply the understanding that organic farming cares about the welfare of farm animals. For the majority though, it is the fact that organic products are simply healthy and pure. Free from chemicals (fertilisers, pesticides and fungicides), hormone and antibiotic residues, organic foods are not only safer to eat but also reduce the instances of food intolerances. What’s more, organic foods taste better and are higher in natural vitamins, minerals and enzymes.”

Abi and her staff – Carissa, Sophie and John – are committed to providing a better place to shop, a friendly, informed service, and creating an enjoyable shopping environment.